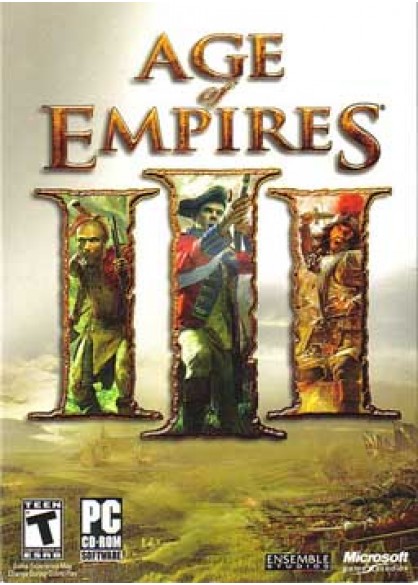 It's the dawn of a new age in real-time strategy (RTS) games. A brave New World is rising a hostile yet beautiful world, filled with innovative gameplay, new strategic scenarios, eye-searing graphics and much more.
Welcome to a world called Age of Empires III.

Home Cities - Players have access to their own European Home City for economic, technological and military support. Your Home City's success depends on you, with your city's improvements retained between games.

This revolutionary new feature to the RTS landscape is incorporated into all aspects of Age of Empires III from Campaign to Multiplayer and is unlike anything you've experienced before.

Much like the persistent character from a role-playing game that encourages you to keep playing, your Home City is an important support system to your efforts in the New World. During a game, your Home City can regularly send you supplies or military reinforcements.

You are the leader of your colony, but your success brings glory back to Mother Europe. The more games you play, and the better you do, the more powerful your Home City will become. Every few games, you gain the ability to both upgrade and customize your Home City:

Upgrade your city by unlocking new types of soldiers or buildings, or improving those you already have.

Broaden your tech tree in whatever direction most fits your play style invest in warships, native alliances, cavalry, artillery or economy.

Customize your Home City by changing the appearance of buildings, the weather or even the types of people who walk, work and perform in its streets.

Throughout a game, as well as in between games, you can visit your Home City to watch its citizens go about their lives, get an opinion on how you're doing, plot your next move or just marvel at the beautiful sunset.

We first set out to reproduce the rich detail of Age of Empires II: Age of Kings. As we strove to make the fascinating Age of Empires III time period come alive, that goal quickly evolved: We at Ensemble Studios wanted to create the best-looking game ever. From the stunning water effects to the hundreds of units battling on-screen, you'll feel like you're a part of the action in the New World.

Tone mapping This photo imaging technique balances the colors in a scene on the fly. The end result is a rich, warm game where bright colors are vibrantly rendered alongside darker counterparts, such as shadows.

Lighting and shadows The sun is always shining in Age of Empires, so it's important that lighting and shadows be an awe-inspiring experience. Units and buildings cast shadows according to a real sun position, and even cast shadows on each other. High Dynamic Range rendering allows us to represent the shiny glints of sunlight that bounce off highly reflective surfaces.

Water We felt that portraying stunning, realistic water effects in the game was so important that we devoted a programmer to it full-time. You'll find the water rich with details like foam near the shore, accurately modeled water motion, flotsam in rivers and realistic water colors. Plus, reflections change with the viewing angle, the angle of sunlight and the motion of the water. The overall effect is breathtaking.

Cliffs and Riverbeds Instead of just stretching terrain, we built a system to attach geometry to the terrain map to allow for realistic overhangs and steep cliffs, from areas like the American Southwest. This effect is supported on random maps too.